In this guest blog, Nikita and Joey share their postponement story and why they decided to have their very own Official (Unofficial) Wedding with one very special witness! 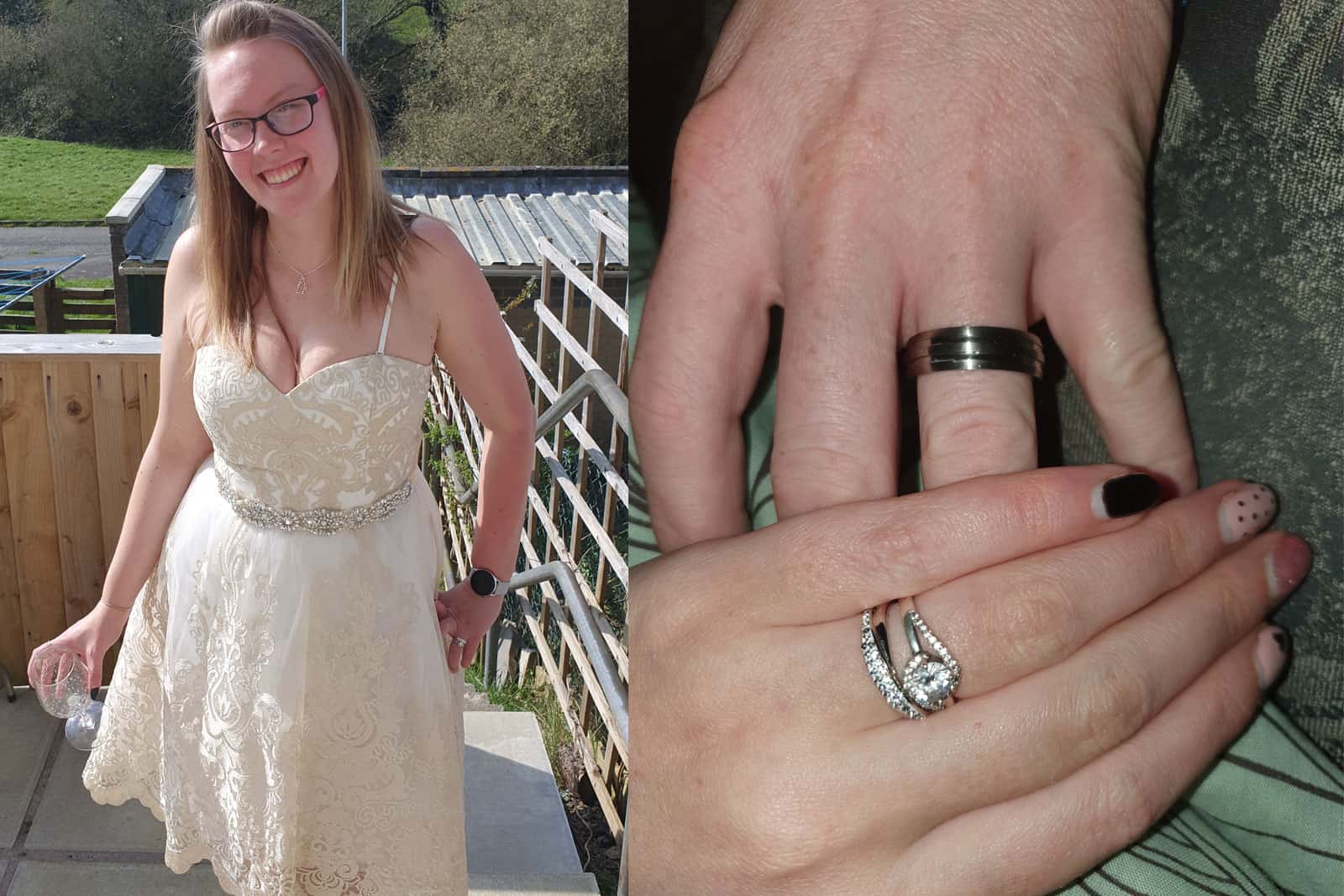 on an avid countdown to the day

“As an excited bride to be you can imagine I have been on an avid countdown since we booked our dream venue Trenderway since March 2019. I was probably starting to drive my husband to be Joe completely barmy with telling him how many days left, even though I knew he was just as excited as I was.”

Nikita and Joe were due to have their legal wedding ceremony at the registry office on the 17th April 2020 and then their blessing or what they called their actual wedding on the 18th April 2020 at Trenderway with all their family and friends.

“If you spoke to any of my friends or even any of my vendors, they would tell you I was the most organised bride they had ever met. It is 100% who I am but I also wanted to be organised as I was not only getting married, but I am studying for my PGCE (teacher qualification) and we were due to move to a new house. Why I decided to do it all at once I don’t know!

I had my hen do over the weekend of the 13th March, my bridesmaids did me proud and whisked me off to Bristol it was an incredible weekend and just what I needed. At this point little did I know that I would be having to postpone our wedding in a couple of days.”

As they were settling into their new home, the coronavirus was starting to increase around the UK but in the back of Nikita’s head she was still so excited for the wedding she couldn’t focus on anything else.

The day it hit that they would have to postpone

The day it hit then that we would have to postpone the wedding still upsets them both every time they think about it. It was the worst 24 hours for them and they wouldn’t wish it upon anyone.

“The moment it truly hit me was when my mum called me to say she has been told by the doctors to not be around crowds for the next 12 weeks. I couldn’t get married and my mum not be there, so after getting off the phone to my mum my next call was to Joe who was at work at the time. He asked me to collect him at lunchtime and we would come up with a plan.”

Through many hugs and tears, they decided to wait a couple of days and then come up with a plan neither wanting to have to wait another year to get married.

“Trenderway were and continue to be amazing”

“Within the next couple of hours, we got a call from Trenderway who were and continue to be amazing. Poor Joe had to deal with that call as I was still a mess knowing that I would have to postpone my dream day.

They gave us a few different options to decide between and told us there is no rush to let them know. They also contacted our caterers Cooplet and Co to confirm that they are happy to postpone at no extra cost as well.’

After speaking with family members and each other we decided that it was inevitable that we were going to have to postpone till the 27th March 2021.

“We have been so lucky that all of our vendors were happy to postpone our wedding to that date free of charge and I am so grateful for how much they have all helped us during this stressful time. These vendors are Trenderway, Stacey Bell, Chantice Jones, Cooplet and Co, and Crown Entertainment.

“I know it sounds like everything worked itself out but here is where the nightmare began AGAIN.

Due to Joe working in the military and due to go on deployment later in the year Nikita and Joe wanted to be legally married.

“Through many discussions with the registry office, we managed to book it for the 28th March 2020 which would mean when we have our wedding blessing at Trenderway we would also be celebrating our anniversary. After manically going around to make sure we had wedding rings and everything all for this legal ceremony including asking two friends to be witnesses for us. We were finally excited if what a bit wary about if the day would go ahead.

We eagerly awaited the update on Monday evening where Boris Johnson put the country on lockdown, this was the news we were dreading. To say we were both devastated is an understatement, we both broke down and felt like the world was against us all we wanted to do was to get married.

The next morning Joe left for work and I asked him if there was anything he wanted, to which he said a marriage certificate.” 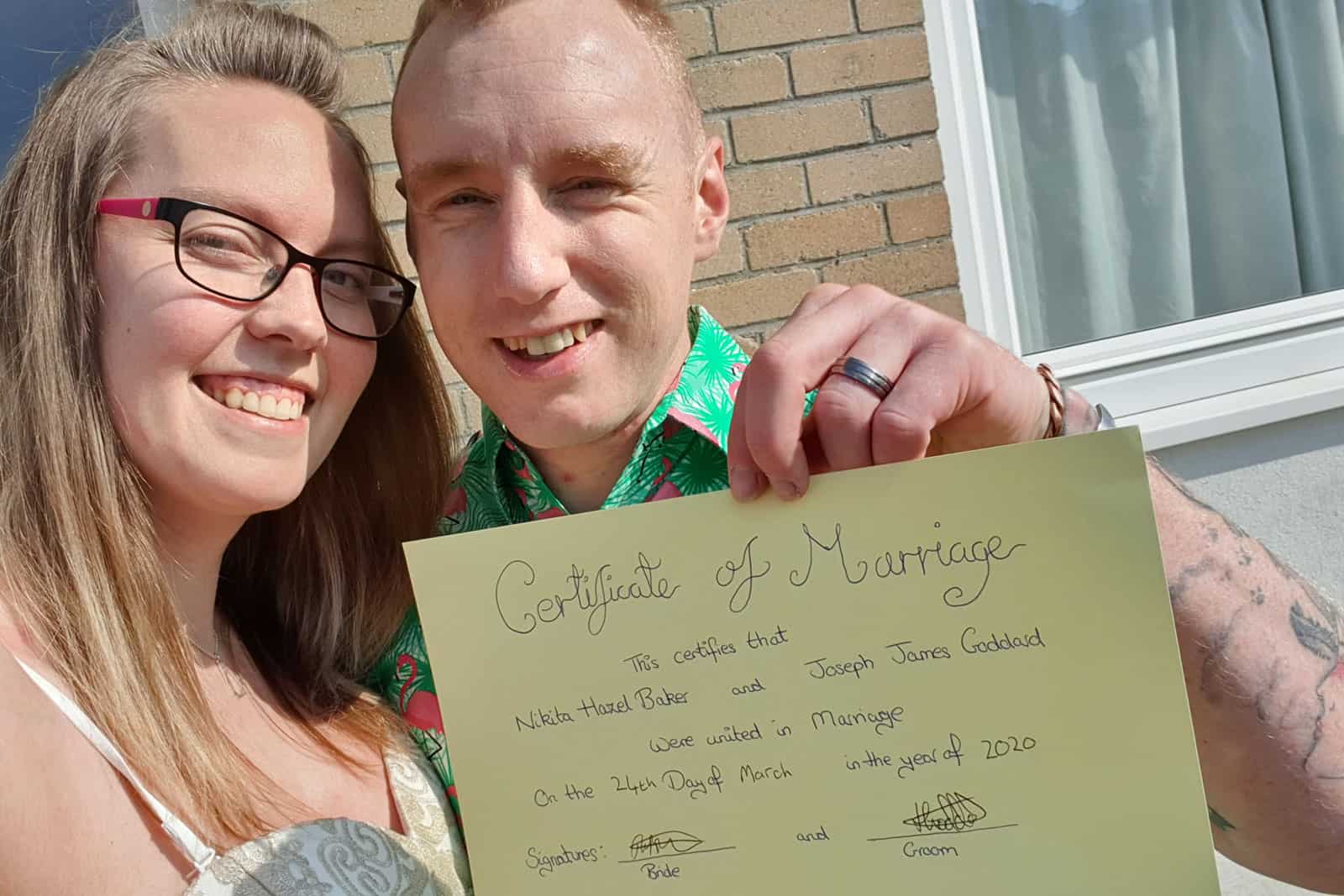 “This is where the idea came from for our Official (Unofficial) ceremony.”

“We went into our garden to have our very own wedding ceremony where the cat was our witness. I wanted to do this to show that no matter what happens in the world we may not be legally married but in our hearts, we are married.

I wanted to write this blog for all Brides and Grooms who have had to postpone their weddings in this horrible time. I know it is heartbreaking to have to change the date and it feels like the world is against you. I promise you it’s not and it’s making the most of a bad situation.

I wish you all the best and hope you are looking after yourselves.”